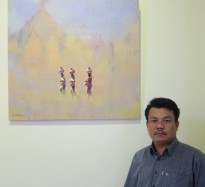 Than Kyaw Htay was born in the year 1978 in Sittwe, Myanmar. He studied at the State School of Fine Art in Yangon, Myanmar, and has studied under multiple renown Myanmar artists. He has studied under artists Win Pe Myint, Soe Htay, Tun Aye, Kyaw Thu Yin, Win Tint, Thet Oo, and Than Kywe. Inspired by Van Gogh, Than Kyaw Htay gives his paintings texture and added depth by scratching a comb through the pigments, at times revealing the contrasting underpainting. This technique smoothes and integrates the tones of the figures, clothes and landscape, giving the works an added dimension and energy.

Than Kyaw Htay is inspired by the Pa-O people of the Shan States in the north-east of Myanmar. They are easily identifiable by the colorful turbans worn by both men and women. These paintings feature a figure or figures standing or squatting, sometimes looking slightly off-balance, which the artist says is an echo of the political instability of the country. They look out over a beautiful but empty countryside, which creates a feeling of isolation, another metaphor for the country as a whole. The artist says he depicts the landscape in vibrant, vivid colors, because his people are longing for a brighter future as they stare into the distance. He depicts the backs of people because Myanmar has turned its back on the world, but the figures are often outlined with a thin, uneven rim of warm contrasting color, representing a sliver of hope in an otherwise grim reality.